For years, people have been asking for direct access to the Baseball Mogul database. Many of them want to be able to build mods that read and parse the data.

For example, Mizerak created a very cool app called the Box Score Parser that sifted through multiple seasons of box scores in order to derive data that can be easily viewed inside Baseball Mogul. Unfortunately, he had to use box scores because they were one of the only things saved in a human-readable form.

This year, we've added the ability to export the Baseball Mogul database as text. On the Game Menu, choose 'Save Game'. Then change 'Compressed' to 'Text' in the drop-down box before saving.

This creates a folder with the name as your saved game (e.g. "Boston Red Sox (2012)"). Inside this folder you will find a collection of text files. Most of them have the ".csv" suffix, which makes them easy to open in an application like Microsoft Excel or Open Office Calc.

The largest file is called "YBY.csv". It contains all of the "Year-By-Year" data for every player. This is the data you see on the 'Batting', 'Pitching' and 'Fielding' tabs in the Scouting Report inside Baseball Mogul. Here's an example of some of that data for Hank Aaron: 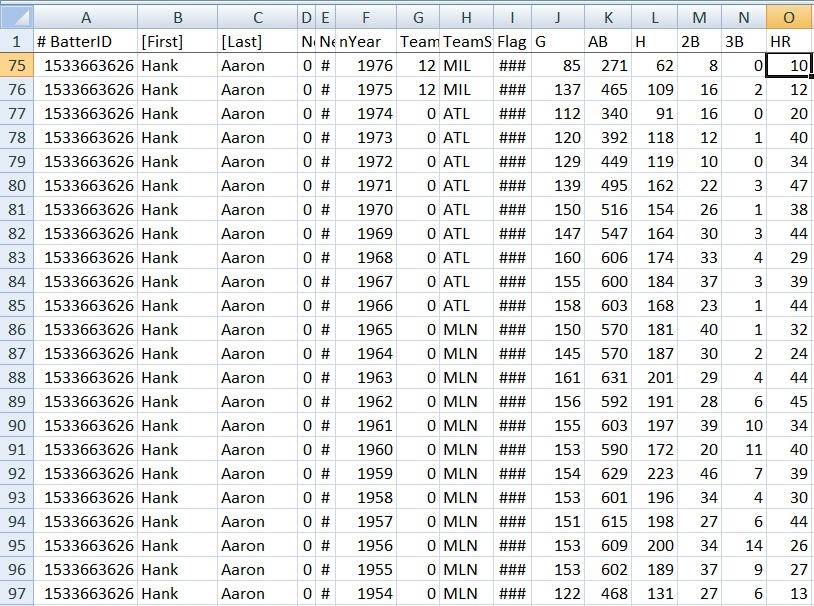 If you edit one of the stats and save YBY.csv, you can then load these files as if they were a saved game, and the relevant stats will be changed.
Email ThisBlogThis!Share to TwitterShare to FacebookShare to Pinterest