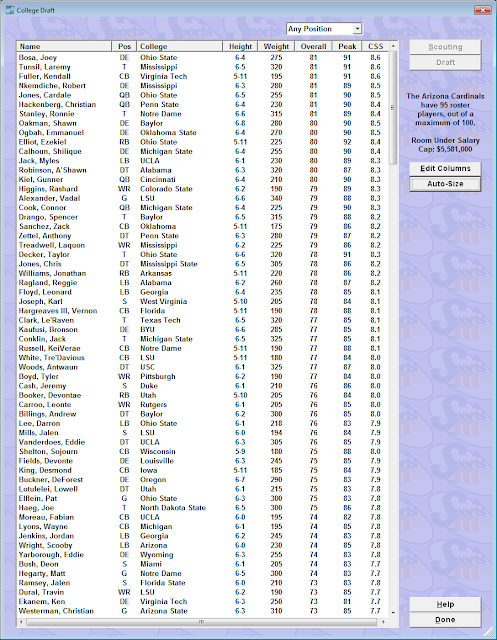 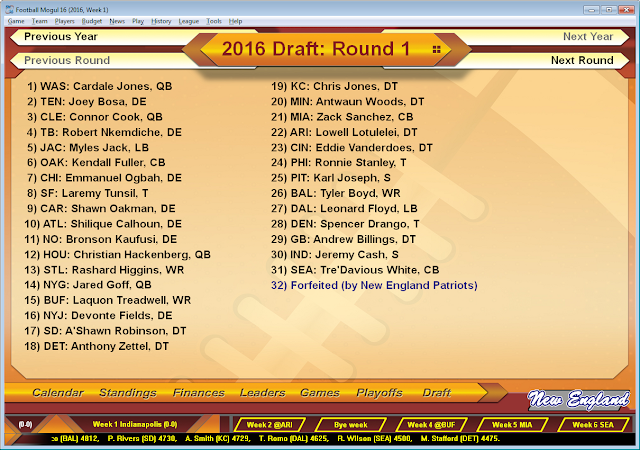 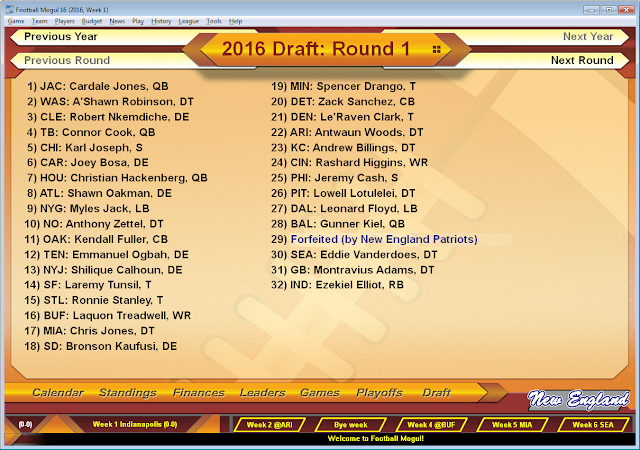 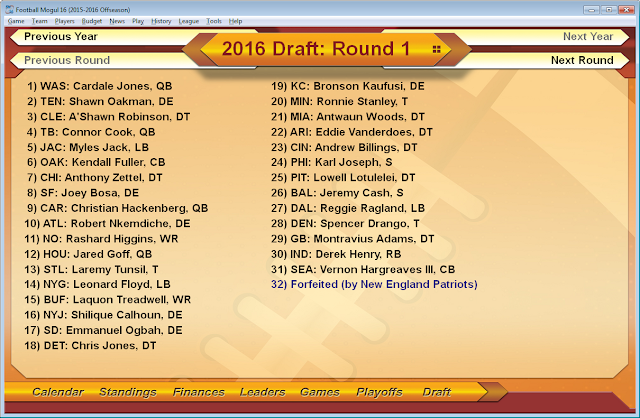 1. You are Running Windows XP

We weren't able to test Football Mogul 16 on multiple Windows XP systems. We aren't specifically aware of any problems, but if you encounter any, please post them to the Football Mogul bug report forum.

We are not the only software publisher to encounter serious problems with Windows 10 (an operating system that is supposed to be "compatible with your existing software").

The first problem is that Windows 10 is likely to complain that we are an "unknown publisher" (even though we just renewed our certificate). This document might help with that problem.

We are also getting some users reporting that Football Mogul 16 simply won't run on Windows 10. Unfortunately, we haven't been able to replicate this problem on our own computers.

This is a high priority, so we will have this fixed as soon as possible (my best guess would be next week: September 21st-25th).

3. You're Waiting for Improvements to Historical Seasons

There are problems with the historical databases used in Football Mogul. For example, if you start the game in 1970, ten teams have fictional kickers that were created by our database tool (because of missing kicker data from 1970 and/or missing stats that they accumulated in the 1950s and 1960s).

This is something we weren't able to address in Football Mogul 16. If you were waiting to upgrade until these problems were fixed, you should wait another year. Being able to play historical seasons is an important feature, and I do enjoy it myself (especially in the 1980s and 1990s). But the rosters and stats still have holes in them, and these holes get bigger the farther back you go in time.

4. You Wanted a New Interface

5. You Would Rather Spend Your Money on Baseball Mogul


"Football Mogul would be great if you just invested as much effort into it as you have into Baseball Mogul."

The second comment more closely reflects reality. Baseball Mogul is our best product and the one that pays my salary.

However, I'm a huge football fan and I love playing Football Mogul. So I want to continue to improve the game and fix problems that you are kind enough to point out. And my brain needs a break from Baseball Mogul every summer anyway (this is what led to the creation of Masters of the Gridiron).

Football Mogul does pay most of Connor's salary, and it's a product where he is able to do most of work (updating rosters and ratings, reading and collecting bug reports, and regressing bug fixes). And we like having Connor around. He's better with customer support than my wife (Dee) and makes it possible for me to primarily focus on Baseball Mogul. 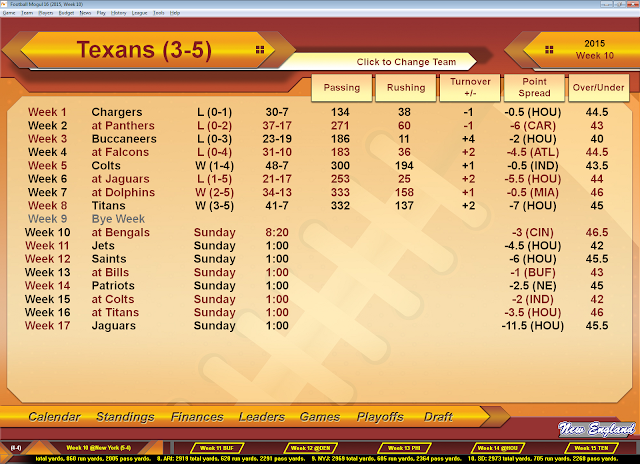 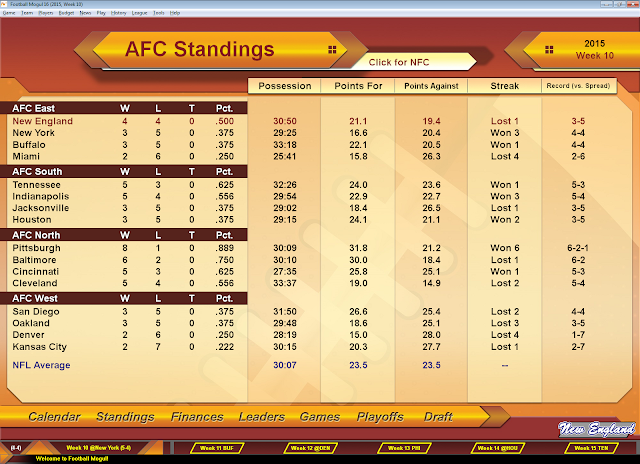 We added some "Cheat Keys" to Football Mogul 16, to help us with testing the in-game AI.
However, there's no reason you can't use them while playing the game. Maybe you want to make the game situation more interesting. Or perhaps you disagree with a play call, or found a bug, and you want to fix a "mistake" caused by the computer.

Teams are listed by division; rankings are for the entire NFL (out of 32 teams).

Note that Power Rankings may differ from predicted record, because projected standings were determined by simulating the actual 2015 NFL schedule using Football Mogul 16. For example, the Colts are projected to win more games than the Patriots, despite having a lower Power Rank, because the Colts play in a weaker division.


Items of note:
The AFC North is the strongest division, with 3 teams ranked in the top 10 (and the most likely division to send 3 teams to the playoffs).

All four NFC South teams are coming off losing seasons, and their struggles will probably continue.
Email ThisBlogThis!Share to TwitterShare to FacebookShare to Pinterest